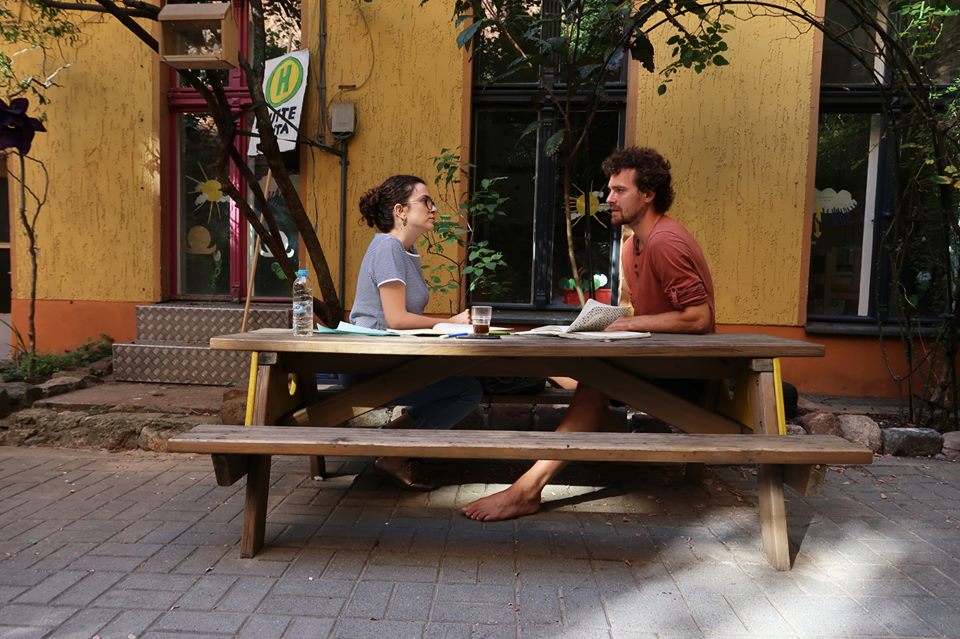 “Oh, it’s very rare that you meet anyone with the same name” was our first exchange before we met in person. At that point I was completely unable to connect a face, a character or any kind of characteristic to the Micha I was about to meet.

Until that day, it was always the other people whose name we had twice in a group. So the group or the “name siblings” always came up with a way to clarify who they mean, often by adding the last name or any other characteristic. In my context in high school, university or work, this usually concerned people called Lena, Laura or Lukas. Name-wise, I had until that day never considered that I could ever find myself in that situation to distinguish myself from another person called Micha.

The Micha I met is indeed the first person that I got to spend some time together and who identifies with the same name as me. That itself is probably not more than a coincidence. But the more this encounter accompanies me over some time, I found that there is a certain kind of beauty in this randomness, because it allowed me to put so many ideas, reflections and experiences in context, that had been remote question marks and unfinished lines of thought until then.

We were both brought up and socialised in completely different contexts, which is clearly part of the surprise effect we both felt. So what exactly are these two paths of our shared name? In many cases, there is a certain story behind a name. We somehow carry it within ourselves, we narrate it from an uncommon perspective: We are mainly affected yet the storyline was in the hands of our parents. A name may be the well reflected result of the life situation of parents. In some cases it can also be an expression of the tradition, linguistic and cultural belonging where parents potentially see their child in the future.

My fascination began to grow when we both sat down together and exchanged on how our first names came to be. It is only then when Micha shared with me that her first name was Micheline, yet in the same sentence she makes me understand that it is clearly Micha that she identifies with. She thinks for a moment, and mentioned that her parents had told her, that they hesitated with naming her Micha, because they feared that it could be primarily associated to the mascot of the Moscow Olympic Games 1980 called Misha. That is in that context indeed very understandable, the traditional French name seems to be a more elegant choice than a furry bear-like being.

For somebody born and socialised in central Europe, there is a certain uniqueness in having Micha as a first name

For somebody born and socialised in central Europe, there is a certain uniqueness in having Micha as a first name – and may it only be that more people in Israel are called Micha than in Germany. That is naturally why it takes so long in my case for two Michas to meet. In my daily life, I clearly don’t link my name with the book called Micha from the Old Testament. However, the hebrew name was indeed thought around Christian and Jewish heritage along with a certain unconventionality that doesn’t necessarily follow the trend of biblical connotation or identifiable association to one geographical space, in my case Germany.

Isn’t it fascinating that we carry a name that is the result of our parent’s personal experiences, imaginations and subjective views on the world in one particular moment? And ironically, in two completely different countries, in two cultural settings, two stories that follow completely different lines of thought end up with two people identifying with the same name.

The surprising effect of meeting Micha and sharing the same name was only the beginning. In fact, it left me puzzling together questions that had accompanied me for many years until then.

That word, whether spoken or written defines belonging in some or another way

At first glance, a name may not be more than a simple word. There is probably no other word that accompanies us as intensely as our name throughout our lives. It therefore somehow expects us to identify with it. That word, whether spoken or written defines belonging in some or another way. Personal identification has numerous aspects: Ethnicity, religion, nationality, gender is one out of the many more. When we hear a name, we unconsciously connect features and characteristics to it. In fact, we have internalised this so much that it is hard avoiding making associations. In what I have experienced, this doesn’t apply to associating Micha to a certain gender.

At high school, it was always the first days, when the new teachers checked presence and read through the list. I noticed by their hesitation that my name was about to be next. They knew that I was in the classroom and absolutely wanted to avoid the opposite grammatical article that defines the gender. My classmates knew that I identify as male, the teacher was the only one in the room that didn’t. Every time a situation like this occurs I sense a certain kind of relief when it’s over, having clarified that it is the male article in my case. Today, this similarly happens in email communication, here and there people address me as a woman that I haven’t met in person and apologise later when we meet. When I tell this to friends, I usually hear as a response: “Well, yes, Micha can be female, but of course it is also male”. Ironically, the first Micha I encounter and that I have the space to exchange with about that topic is a woman. This made me realise how we both carry a name that is gender-inspecific.

I personally aspire a world that functions and thinks without gender specificity, especially for it clearly excludes individuals that cannot or don’t want to identify as either female or male. So, shouldn’t I be happy then to identify just as Micha, a name that obviously perfectly fits for both genders, across cultures and languages? That would also include that I shouldn’t be irritated by receiving emails addressing me as Mrs. Pollok. Although that matter somehow has been with me over time, I admit I still get irritated by it. I am caught between my personal visions of a society and its real functioning in practice.

On top of a coincidence, meeting Micha is a beautiful encounter with a person with whom I share very little but a view on the world and a first name. The fascination lies in the fact that this encounter happens far away from my regular circle of action. It also makes me reflect on all the irritating and also positive experiences circling around my name that I had collected until today. The beauty of the coincidence above all is that there lies so much connectedness in the diversity across cultures, continents, languages and gender categories, if only we allow ourselves to discover it.