At the bakery, you turn right. There is a small road leading away from the buildings, towards the mountains that separate the Bekaa Valley from Syria. There, in between a garage, a newly built football court and little dwellings, is a farm. Everything is self-made: the main building from plastic tarps, cardboard and wooden beams, the neatly organised and thriving fields. It has all been made from scratch – last year, there was nothing but abandoned land here. 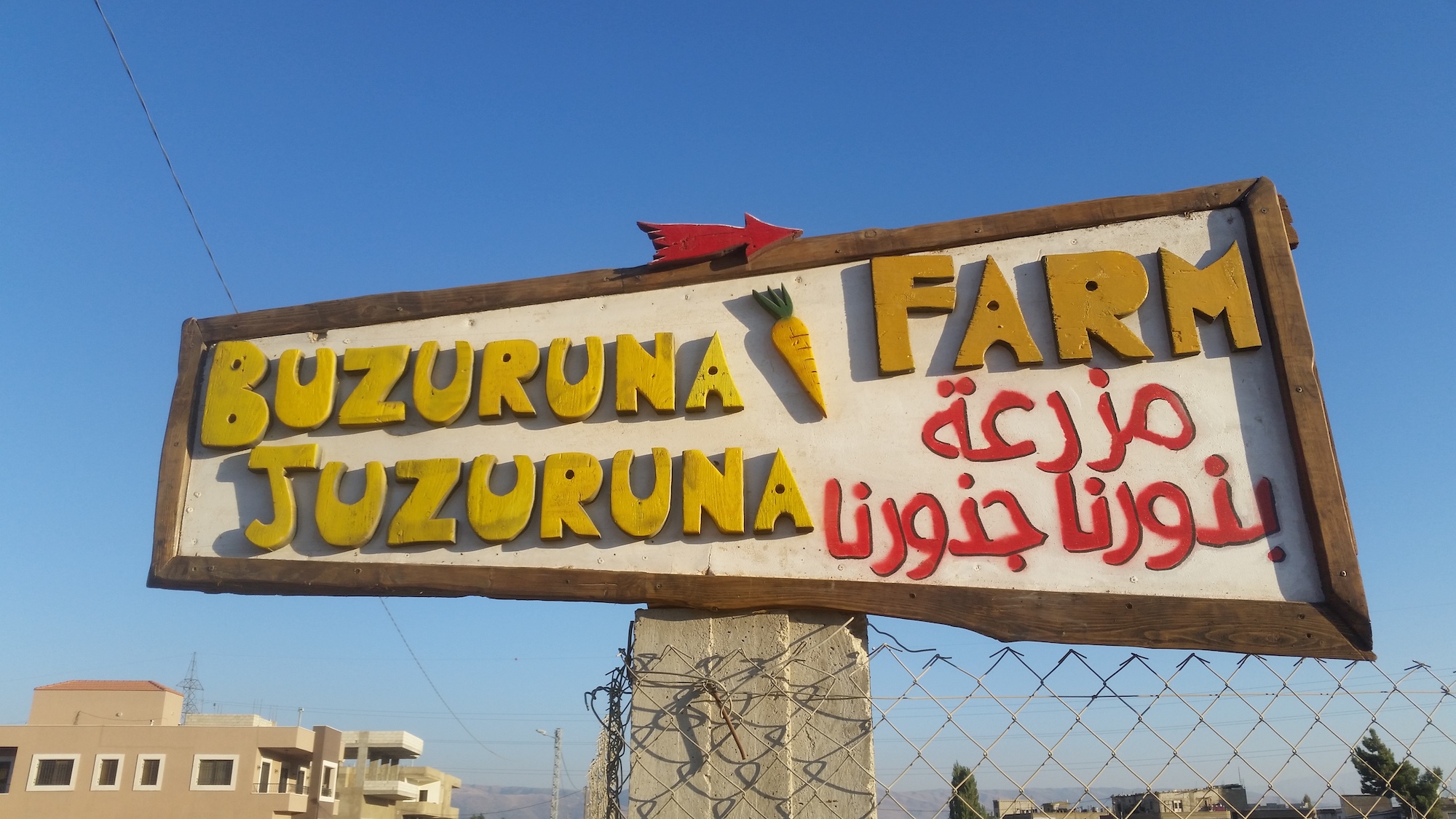 Salem Ahmad Al-Azwak is walking through the greenery, stepping between tomato plants, physalis bushes growing close to the ground and young apricot trees that line the plant beds. He stops to pick a tomato here and a physalis there, the garden shears always ready in his waistband. From the apricot trees, there is nothing to harvest yet because they are too young; it will take at least another two seasons.

“I became very inspired here, everyone on the farm is working and learning together,” says Al-Azwak.

It is evident how proud he is of what they have built here in the small town of Saadnayel in the Zahle district: a community farm with people from Lebanon, Syria and France. Buzuruna Juzuruna, literally “Our seeds are our roots,” began to grow in June 2017, after Al-Azwak met the French siblings Zoé and Ferdinand Beau. The Beaus, concerned about the fate of local seeds during the war in Syria, were looking to start an organic farm in the area. People with different expertise were brought together until the founding team of five was complete – Al-Azwak among them, adding to the group his expertise in composting and tree growing.

“I really came to appreciate how much knowledge and tradition lies in one little seed.”

Some years ago, you might have been able to witness a very similar scene in the rural area outside Damascus where Al-Azwak lived and farmed before the war.

“I was born a farmer to a family of farmers, our heritage was always deeply rooted in the land,” he says.

The wider region of the historical Mesopotamia, stretching across countries including today’s Turkey, Syria and Iraq, is called the Fertile Crescent. It is one of the oldest agricultural regions in the world; the traditions around farming and growing here seem to date back to a time that cannot be dated.

Of course, modern technology did not leave the Fertile Crescent untouched and farming methods have changed here over time. Still, a lot of families in Syria – including Al-Azwak’s – have managed to preserve one long-lasting tradition over the last centuries: the handing down of seeds. Traditionally, says Al-Azwak, every family has their own variety of seeds, which are very much adapted to the local environment and keep being passed on from generation to generation. In gardens and fields in the Syrian countryside, you would find a certain kind of tomato that has never been grown outside a kilometre from there. Families would collaborate and exchange seeds with their neighbours, but they would simply be passed on as “Salem’s seeds,” instead of being named and classified according to industrial standards. Apart from the cultural meaning, Al-Azwak describes a sober, matter-of-fact, reason for why this practice is so crucial:

“If you have seeds, you can grow food. It’s an important thing for people who don’t have much.”

In gardens and fields in the Syrian countryside, you would find a certain kind of tomato that has never been grown outside a kilometre from there.

But things changed when the war in Syria got worse and more and more people got displaced. Al-Azwak had to leave his home and land behind in 2012. He didn’t take the seeds with him and passed them on to a relative instead who was farming too. Unfortunately, they never got to grow them but left for Saudi Arabia. Or fortunately, because four years after he had left them behind, 50 grams of the seeds found their way back to Al-Azwak through this route.

“It was all just a lucky coincidence,” he says smiling.

Now, his seeds have become the roots of Buzuruna Juzuruna. The farm has turned into a way to preserve and – above all – share this agricultural heritage in a time like the Syrian war, which causes so much displacement and migration and also forms a threat to traditional knowledge so tightly connected to the land. Every month, ten to 15 students from all over Lebanon and with the most different backgrounds come to the farm and learn. The kids from the neighbourhood also visit once a week to take care of their own plant beds. The long rectangles, arranged around a little olive tree like the sun with its rays, are probably the only “chaotic” spot on the farm, because the kids can grow whatever they want however they want. Potatoes, corn and amaranth are getting to know each other closely here. And whatever the little gardeners harvest does not go to Beirut’s markets, like some of Buzuruna Juzuruna’s produce, but home to their families.

“If you have seeds, you can grow food.”

Working on the organic farm also meant taking a step back for Al-Azwak. In Syria, he had started to use more and more chemicals, because it felt necessary to make more profit. It was in conversations with Ferdinand Beau that he began to think differently about this. Where he would use a pesticide, Beau asked him: “What would your parents do?” So Al-Azwak started practising the traditional techniques of the region again, and passed them on to the French siblings. This is how, for everyone at Buzuruna Juzuruna, life is a cycle of working, learning and teaching.

“I really came to appreciate how much knowledge and tradition lies in one little seed,” says Al-Azwak.

The Fertile Crescent is one of the oldest agricultural regions in the world; the traditions around farming and growing here seem to date back to a time that cannot be dated.

But he has also learned how fragile this connection is. Upon leaving Syria, taking the seeds with him was not a priority – he did not know that there would be a chance to grow them in the future, and the move was just supposed to be temporary anyways. Today, he does not know where the seeds are, except for the 50 grams that made their way to him. One thing that he misses is the “Italian peach” – bright red on one side, pink on the other and with a white stripe going from top to bottom; the best peach Al-Azwak ever harvested.

“I just don’t know anyone anymore who grows it,” he says, looking over to the mountains, towards his home.

This would be a loss not only for Al-Azwak but also for caretakers of seeds like the International Centre for Agricultural Research in the Dry Areas, an organisation that has collected and stored an impressive amount of Syrian seeds over the last decades. Its headquarter was in Aleppo, but it lays abandoned after the researchers had to flee. They could only get their hands on a fraction of the samples, which are now stored in a temporary seed bank in the Lebanese town of Terbol, also in the Bekaa Valley and not far from Buzuruna Juzuruna.

“I was born a farmer to a family of farmers, our heritage was always deeply rooted in the land.”

Despite the fact that both projects seem to be thriving in their new home, the connection to the homeland has never ceased. Maybe there will be a time when both can return and – who knows – maybe the Italian peach will be waiting there for them, either in a walk-in cold storage or still in the fields, deeply rooted in the land.